This LibGuide is intended to provide a few starting points to assist you with your research on issues related to smart defence. 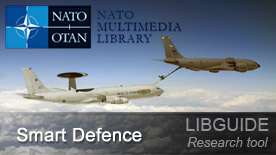 At the Munich Security Conference in 2011, NATO Secretary General, Anders Fogh Rasmussen, presented a new approach to defence spending in a time of economic crisis in his keynote speech. This new approach, Smart Defence, refers to “ensuring greater security, for less money, by working together with more flexibility.” As part of this approach, he advocated for nations to “pool and share capabilities, to set the right priorities, and to better coordinate our efforts.”

At the Munich Security Conference in 2012, the Secretary General stressed the importance of Smart Defence as well as the need for interoperability of NATO capabiities:

I see three significant changes that will affect NATO in the coming years: defence cuts in Europe; the evolution of the United States defence posture; and the end of our combat operations in Afghanistan.

We need to respond to these changes so that, by the end of this decade and into the next, we emerge stronger as an Alliance, not weaker. A key part of our response is what I call Smart Defence - a new way for NATO and Allies to do business. Faced with fiscal austerity, and defence budgets under pressure, this is about doing more by doing it together.

I outlined it last year, in this very same conference room. And at our NATO summit in Chicago in May, I expect all Allies to commit to it. Because Smart Defence is a long-term strategy to deliver the right capabilities right across the Alliance.

It’s the ability to connect all our forces. Common understanding. Common command and control arrangements. Common standards. Common language. And common doctrine and procedures. It concerns everything we do as an Alliance.

At the Secretary General's monthly press briefing on 5 March 2012, he stated:

Smart Defence is about lining up national requirements and NATO’s requirements. It is about setting clear priorities. Specialising in a coordinated and deliberate way – by design, not by default. And cooperating between Allies, and with the European Union, so that every effort counts, and nothing is wasted.

I expect that in Chicago, we will make Smart Defence the new way we do business. And apply it to three strands of work: immediate projects, longer-term projects, and strategic projects .

First, an initial package of more than 20 multinational projects that will address critical capability shortfalls. We already have lead nations assigned to these projects, and we have confirmed participants.

Second, we will look at a number of longer-term multinational projects that are already in the pipeline: Missile Defence, Alliance Ground Surveillance and Air Policing. Air Policing in the Baltic States is a model for Alliance solidarity and a practical example of smart defence.

Third, we will target a number of strategic projects for 2020 and beyond. As our operation in Libya showed, we still face some specific capability gaps, such as air-to-air refuelling and joint intelligence, surveillance and reconnaissance. And we know that we will need stronger cooperation, across the Atlantic and in Europe, to fill them. So in Chicago, I will look for a commitment to make sure that this is what we deliver.

Smart Defence is about building capabilities together. But we also need to be able to operate them together. That is why I have launched the Connected Forces Initiative. It puts a premium on training and education, exercises, and better use of technology.

In a speech at the Inter-parliamentary Conference for the Common Foreign and Security Policy and the Common Security and Defence Policy in Vilnius (6 September 2013), the Secretary General stated:

At NATO, we are working hard to provide critical capabilities. Our Smart Defence initiative, for example, has 29 multinational capability projects in the pipeline. The first – a helicopter maintenance project in Afghanistan – was recently completed. And for its part, the European Union is working to provide capabilities through pooling and sharing. For example, the European Union is leading a multinational programme on acquiring more air-to-air refuelling planes.

The NATO Emerging Security Challenges Division teamed up with Carnegie Europe to organize the conference The World in 2020 – Can NATO Protect Us? The Challenges to Critical Infrastructure.

Threats to critical infrastructure, such as cyber attacks international terrorism and attacks on energy supply, can be devastating to the livelihoods of modern societies and cannot be met by military means alone. The conference with renowned speakers from NATO, academia and national administrations discussed NATO’s role in meeting security challenges to critical infrastructure.

The conference report can be downloaded here: