This LibGuide is intended to provide a few starting points to assist you with your research on the 2014 NATO Summit in Wales.

Please note that this LibGuide is no longer updated

Wales Summit Declaration issued by the Heads of State and Government participating in the meeting of the North Atlantic Council in Wales on 5 September 2014.

The Outcomes of the NATO Wales Summit 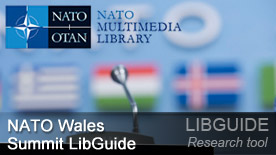 "With the decisions we have taken here in Wales, NATO will remain the bedrock of our collective defence." (NATO Secretary General,  5 Sept. 2014)

Decisions, statements and key issues discussed during the Summit:

- On Thursday 4 September, NATO Leaders at the Wales Summit reaffirmed their commitment to supporting Afghanistan and called on the two presidential candidates to work together and to conclude the necessary security agreements as soon as possible.

- On 4 September, NATO leaders pledged support to Ukraine. The Secretary General Anders Fogh Rasmussen mentioned that "a comprehensive and tailored package of measures" will be taken to help Ukraine. The focus of NATO support will be on four areas; rehabilitation for injured troops, cyber defence, logistics, and command control and communications. NATO's assistance to Ukraine to boost cooperation will amount to around 15 million euros.

- On Friday 5 September, the head of state and government of the allied countries took decisions to ensure a robut Alliance, through  a Readiness Action Plan (RAP). One of the most important NATO's reassurance measures, 18 in all, on the eastern flank of the Atlantic Alliance, is to create a new element (the "spearhead") within the NATO Reaction Force.

- On 5 September, the Alliance's 28 leaders agreed at their Wales Summit to reverse the trend of declining defence budgets and raise them over the coming decade, a move that will further strengthen the transatlantic bond.

- On the same day, NATO leaders, upon the American President Barack Obama's request, discussed the approach to be adopted by the international community towards the threat represented by the terrorist organisation of the Islamic State in Iraq and the Levant. (See: "NATO Allies Agree To Take On Islamic State Threat" published by Associated Press on 5 September 2014.)

- The next NATO summit will take place in Warsaw, Poland in 2016.
First analyses about the outcomes of the Summit:
- On 12 September 2014, the U.K. House of Commons Library published a 21-page report: "NATO Wales Summit 2014: outcomes - Commons Library Standard Note".
- On 12 September, J. Hemmings (ISN) published "NATO and the ‘Pivot’ after Wales".

Preparation of the NATO Wales Summit

In September 2013, Karl-Heinz Kamp, from the NATO Defense College, was expecting a specific agenda.

In November 2013, the NATO Secretary General called for a new phase of NATO's engagement in Afghanistan (the operational preparedness, the Connected Forces Initiative).

On 3-4 December 2013, during the annual NATO Foreign Ministers meeting at NATO Headquarters in Brussels, US Secretary of State John Kerry added that the NATO Summit will also examine "how to invest in the capabilities, the exercises and the training that will enable the member nations to address the security challenges of the future".

On 3 February 2014, in London, the NATO Secretary General stated: "This summit will shape the future of our Alliance."

On 8 April 2014, in Paris, the Secretary General said that the crisis between Russia and Ukraine raises serious questions for Euro-Atlantic security. Mr Rasmussen also added: "...now is the time for the right answers for key issues for the Wales Summit in September".

At the  June 2014 meeting of Defence Ministers, the Allied Ministers decided to draft a "Readiness Action Plan" for adoption at the Wales Summit.

Prior to the meetings of NATO Foreign Affairs Ministers (25 June 2014), NATO Secretary General Anders Fogh Rasmussen stresses the historical importance of the NATO’s open door policy which will also be reminded at the Summit.

On 25 July 2014, the UK House of Commons Library published a report on the key themes which would be discussed during the Summit: NATO Summit Wales 2014 - Commons Library Standard Note.

On 1 Sept, NATO publishes the "NATO Wales Summit Guide: the issues on focus".

RUSI will host the only London-based policy conference on the eve of the NATO Summit in Wales, bringing together policy makers from Member states.