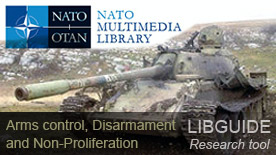 This LibGuide offers a set of high-quality sources of information to assist you with your research on issues related to arms control, disarmament and non-proliferation, in particular within the NATO context.

"For almost 70 years, NATO has been committed to preserving peace in Europe and to controlling the proliferation and number of nuclear weapons. Even before NATO established its first nuclear weapons policy in 1954, the North Atlantic Council in 1953 endorsed the US efforts to “seek a solution to the problem of atomic armaments.” (NATO Deputy Secretary General Rose Gottemoeller: ''NATO’s enduring commitment to the Non-Proliferation Treaty'', 5 May 2017)

Within NATO, there are a number of forums in which discussions on arms control, disarmament and non-proliferation take place (Source: 2016 Secretary General's Annual Report):

- the Committee on Proliferation meets in political-military and defence formats to discuss WMD non-proliferation efforts and defence against chemical, biological, radiological and nuclear (CBRN) threats;

- the Special Advisory and Consultative Arms Control, Disarmament and Non-Proliferation Committee  is a forum for discussion of strategic stability and nuclear transparency. NATO allies agreed to establish such committee at the Chicago Summit in 2012, where the NATO Deterrence and Defence Posture Review (DDPR) was agreed.

NATO’s work in relation to arms control and non-proliferation is supported by a number of NATO-accredited national entities. The Joint CBRN Defence Centre of Excellence in Vyškovin the Czech Republic, created in 2006, is one of them. (Source: 2016 Secretary General's Annual Report).

A selection of early NATO's milestones:

"A State concludes a disarmament treaty and reduces or regulates its armament on the premise that other States would do the same. Thus, the basis of a disarmament treaty can be described as reciprocity." (Source: "Suspension of Certain Obligations of the CFE Treaty by NATO Allies: Examination of the Response to the 2007 Unilateral Treaty Suspension by Russia" by M. Hayashi, in Journal of Conflict and Security Law, vol. 18, no. 1, April 2013).